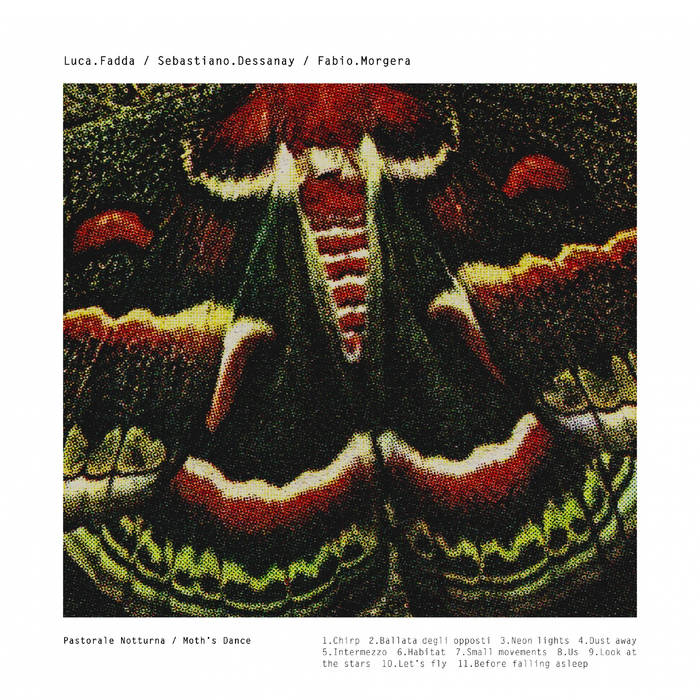 With this nocturnal pastoral The Fadda, Dessanay, Morgera Trio recounts the experience of a winged insect that moves in hazy, crepuscular, nocturnal environments. A central body and two lopsided wings that sway in the unenlightened in search of sustenance and quiet.

The solid double bass played by Dessanay, vigorous, solid, centered, is the body that supports the twirling of two asymmetric and opposite wings, the junction point between tradition and modernity, between structure and its collapse. One wing is deeply rooted in the most solid jazz tradition. Morgera expresses his flight through a very clean bebop language. The other wing is unstructured, electronic, often with glitches and short-circuits. Fadda copies, pastes, creates short circuits and gets lost in the continuous pursuit between the organic sound of the analog trumpet and the generated glitch of the electronics that gets confused in trying to mimic the analogue, thus creating in turn new improvisations and unexpected languages.

This creature tries to follow and escape from tradition, dances in the dark because it is far from the light, from the revealed, from the acceptance of the illuminated and known path. First, it searches..., then it searches for intimacy to discover itself, to indulge in stylistic imprudence, in order to find itself and its uniqueness.

Recorded in Brooklyn (US) and Birmingham (UK) between 2012 and 2016.
Mix and mastering: Luca Fadda
Produced by Luca Fadda
Artwork by Louis Muhe

Sebastiano Dessanay is a double bassist and composer active in the European jazz, contemporary and avant-garde scene. His music is highly informed by a strong sense of melody and mixes traditional styles with more experimental material.

He currently leads his own jazz combos (trio and quartet) and he is bassist of Propellor and Decibel contemporary ensembles. ... more

Bandcamp Daily  your guide to the world of Bandcamp

Cannibal Corpse's George "Corpsegrinder" Fisher stops by for an interview